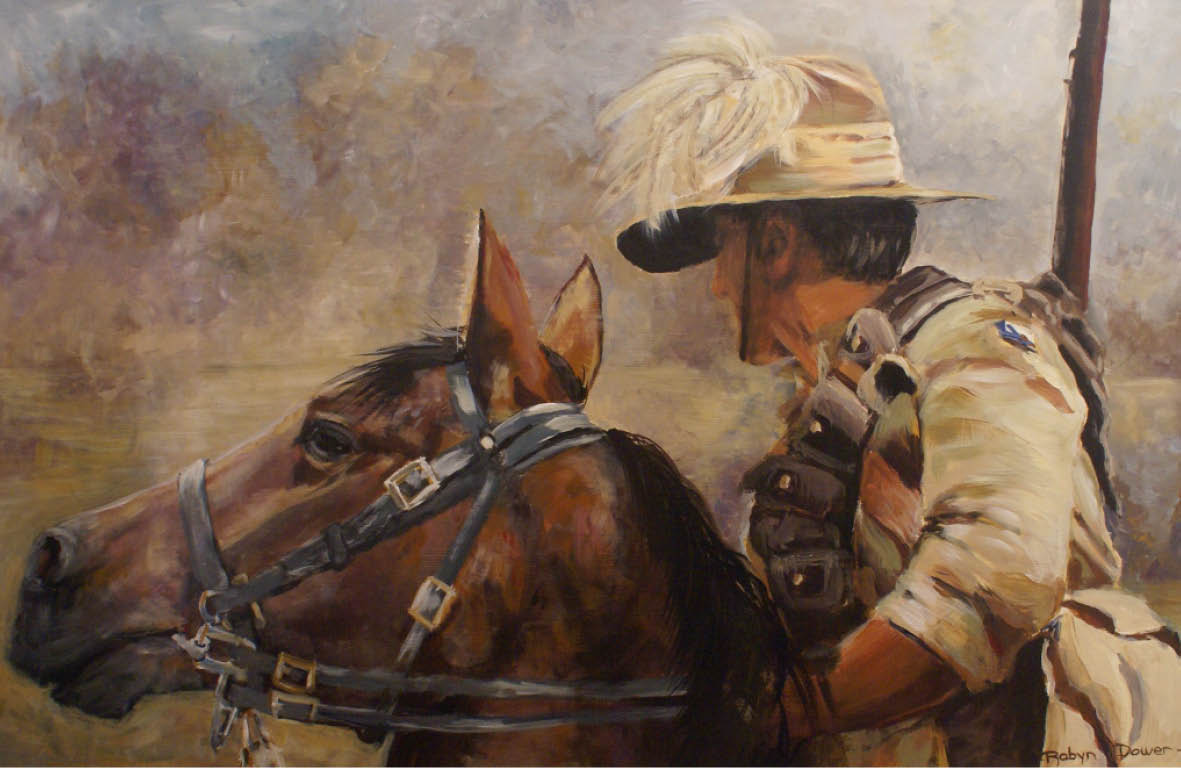 The Pact was written for the 100-year commemorations of Anzac in 2015. I wanted to write a story about the Australian Light Horse and, in particular, the bond often forged between the soldier and his mount. It was the overall winner at the Ipswich International Writing Competition in 2015 and has been recited at many commemorative events since then. It will always hold a very special place in my heart.

Featured artwork – Left Flank – courtesy of my sister, Robyn Dower.  Robyn’s powerful painting also won a major prize in the same year. Although it was never intended, it appears they were made for one another.

It was quiet that Shift, I was on my last rounds,
there was only the hum of the normal ward sounds.
“Will you listen? Now listen.” an old man had said
as I walked by the end of his hospital bed.

“Do you hear what I hear? It’s a glorious sound.
It’s the thunder of hooves as they strike at the ground.”
I looked back at the man in that bed where he lay
but I knew he was dying and slipping away.

He is rambling I’d thought as I turned his light down,
just another poor soul in a hospital gown.
It was then that he took a firm hold of my hand
and he told me there’s something I must understand.

That tonight he was keeping a PACT he’d once made
to a mate he had known in the light horse brigade.
There were tears in his eyes so I sat by his bed
and I’ll never forget what it was that he said.

“All my mates, they were charging alongside of me
when a bomb had exploded we just didn’t see.
For a moment I thought that the time had been stilled
but my mates and their horses, they all had been killed.

Now my horse had stood near me despite his own fear
with his blood running red and the enemy near.
With my foot in the stirrup, he’d made for the line, and he got me back safely, that war horse of mine.

So I couldn’t just leave him alone to his fate
and I spoke one more time to my gallant old mate.
Now that horse he had courage, I felt I had none,
but I knew from his bleeding what had to be done.

Then I took up my rifle with trembling hands
while my curses rang loud on those far away sands
and I cried for my mate as I whispered goodbye
and I begged him to come when it’s my time to die.

So I have to be ready, the time’s edging near,
I can hear he is coming with saddle and gear.
Then we’ll turn on our heels and we’ll make for the sky
and he’ll carry me safely to heaven on high.

Will you listen? Now listen to what I have said
for my soul will be leaving this wretched sick bed:
Then you’ll hear what I hear. It’s a glorious sound.
It’s the thunder of hooves as they strike at the ground.”

Then his hand it just loosened and fell to his side
and I sat there awhile as I quietly cried,
‘til the air had grown cold and my hair stood on end
and the curtains they shimmered and time seemed to bend.

I would swear that I saw a horse pawing the ground
with that man in the saddle and turning it round.
He was soon joined by others, the noise was a roar
and I knew that all things weren’t the same as before.

On such wonder I gazed as these ghosts all appeared.
The man tightened the reins and that mighty horse reared.
It was then that I heard it. A glorious sound.
The proud thunder of hooves as they charged heaven bound.